Upgrading from Exchange 2007 to Exchange 2016 through 2010 involves two major stages:

Ensure that you have the system requirements

For smooth installation of Exchange 2010, and upgradation from 2007, ensure that you have the minimum system requirements:

If you want to run a disjoint namespace in Exchange 2010, do the following:

In this step, set a DNS suffix search list using a GPO.

For this, modify the relevant attribute (msDS-AllowedDNSSuffixes) value of the domain object container (using ADSI edit).

Also, verify these settings (by pinging from other servers).

Client Access Role is the first server role to be installed on a server. This role facilitates the functioning of Exchange email clients.

You can install this role from Exchange 2010 DVD by running the setup exe (if not installed previously, initiate .NET Framework 3.5 SP1 and Windows PowerShell v2 installation from here). For Exchange 2010 installation, accept the license agreement, and follow the instructions on the dialogue box. Here is a what you will do while going through different pages of the installation wizard: 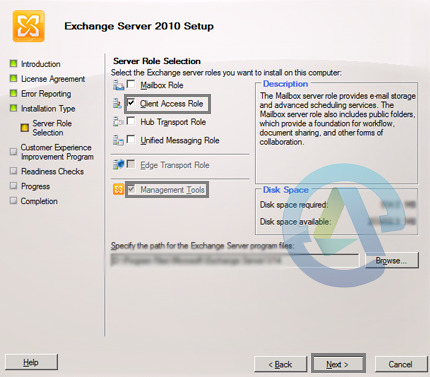 NOTE: It is possible to have separate servers for each role; but you can deploy multiple roles on servers as per the requirement.

Hub Transport Role facilitates internal mail flow in the organization. It can be installed on a separate server, or on the same server on which the CAS role was installed. 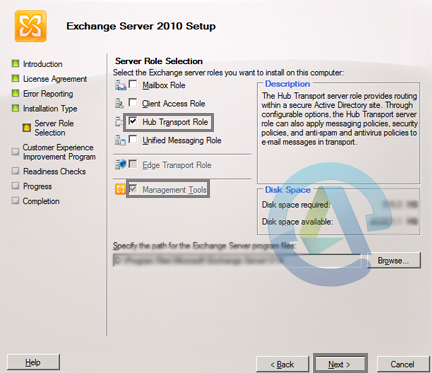 The Unified Message Role facilitates voice mail and fax in Exchange mailboxes. For installation and verification of this role on a dedicated server, follow the steps for the earlier roles, but select Unified Messaging Role on the Server Role Selection page.

The next step after the installation of UM role is to configure and enable unified messaging. If you already have UM in Exchange 2007, transition it to Exchange 2010 using Exchange Management Console or Exchange Management Shell. If you do not have one in Exchange 2007, create and configure a dial plan, gateways, and mailbox policies for UM, and then add the UM server to a dial plan. Finally, enable users for UM so that they can start using the UM features.

Mailbox Role is important as it hosts databases—both the mailbox database and public folder database. Its installation and verification procedure—except for the selection of Mailbox Role on the Server Role Selection page— are the same as for described earlier.

As the next step, you can move the offline address book generation to Exchange 2010. Use the Move Offline Address Book wizard (of Exchange Management Console) to do this.

NOTE: How to install a server role along with an already installed one?

After the installation of the Client Access Role, it is possible to install Hub Transport, Unified Messaging, and Mailbox Roles on the same server. However, the procedure for this is slightly different from that for installing them on a separate server. Here is how you can do this:

The Edge Transport Role is different from the all other server roles—it cannot exist with any other server role as the other roles do. Its responsibility being antivirus and anti-spam filtering, it is deployed outside the AD forest (in the perimeter network) for security reasons. On the installation and verification side, the procedure is similar, but it is mandatory to deploy this role on a dedicated server.

You can use the Exchange Deployment Assistant to help you complete your deployment.

Upgrading from Exchange 2007 to Exchange 2016 through 2013 involves two major stages:

User Login History, Statistics and Activity Reports in the Office 365